After weeks of preparation and waiting for materials to be delivered we sent our team down to Tsabong on Tuesday with a first-fix of goods.  A final delivery of R70,000 worth of PVC pipes and fittings arrived on Friday and was transhipped to a local transporter together with the remainder of the reverse osmosis membranes and a few tons of Grundfos pumps on Friday.

In order not to prejudice my ongoing mental and physical health campaign I found it necessary to take part in the Gaborone Striders’ Saturday session from Wimpy on Western Bypass to Sir Seretse Khama International Airport and back again.

It was of course necessary to have a proper breakfast after the post-run chat, so I hooked up with a friend and went to Botswanacraft. Nice omelette fully packed with ham, peppers, mushrooms, cheese, tomatoes and onions.  The fresh pineapple and orange juice is pretty good too.

Home for a shower, packing and then off to the distribution board manufacturer to collect a new motor control centre and various signal marshalling panels. 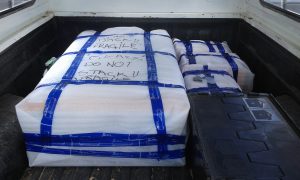 And that was me on the road, all going well as far as Kanye, at which point it started going swimmingly.

Literally, as the heavens opened and did their best to drown me. Between Kanye and Jwaneng I managed to overtake the rain, and was then overtaken by a BMW 1 Series. Right up until the stretch of road where it becomes a roller-coaster of subsidence and (s)he started bouncing all over the road and had to slow down. I don’t know why people can’t look after their cars, it’s a basic issue of safety (And the police bakkie that overtook me earlier today on the day of writing this post was bouncing so hard through Dibete it was almost bottoming out the front suspension).

A brief stop-over in Jwaneng for human-fuel and the journey continued, through sunset and into the night, which contained its own set of surprises, and reminded of a rather African meme.

Parent, husband and civil engineer born and raised in Britain before emigrating to Botswana. Interests in construction, information technology, fitness, mechanics and mapping, among others. View all posts by Michael

This site uses Akismet to reduce spam. Learn how your comment data is processed.