My Facebook and Twitter feeds have been buzzing with confusion for the last couple of weeks since Botswana Power Corporation announced a new scheme to reduce power usage.

Load-shedding has been a fact of life in Botswana for years now, and recent announcements about a new scheme known as Demand Side Management have led to lots of noise across social media, mainly from people enquiring how to calculate their power consumption so they don’t get cut off.

With this post I hope to clarify some of the confusion and help people be better informed, you might even save money when you review what is using power in your house.

Since the new Morupule B power station has failed to reliably produce sufficient electricity for Botswana BPC now relies on imports from South Africa’s Eskom.  Eskom is fighting its own battles with existing infrastructure reaching the end of its design-life and new projects horrendously delayed by poor management and disruption by labour unions, so supplies are often cut at short notice.

For several years now BPC has been using load-shedding to reduce demand, with different locations being cut-off on different days of the week (link updated 14 May 2015) to keep usage in line with supply.  At the same time BPC has implemented “prepaid electricity” where you buy units from vendors (supermarkets, petrol stations, etc.) in much the same way as for prepaid mobile phone packages.  In return for your money you get a string of numbers that you enter into a smart meter, this loads a credit of units (kWH) that then reduces as you use electricity.

Another feature of smart meters is that they can be set remotely to perform various functions under a scheme now known as Demand Side Management (DSM): either basic on-off if you exceed a certain threshold of use or to automatically switch large loads like geysers.  To switch individual appliances on and off additional hardware or rewiring of the premises’ distribution board is needed and I’m not aware of this having been done in Botswana yet, although Eskom have rolled out remote geyser control in some areas.

BPC have announced that during critical times they will restrict users to 10A or 2300W (2.3kW) using the Demand Side Management capability of the smart meter, and if you exceed the limit the meter will cut power for 1 hour.  The meters do apparently beep and display a warning when the limit is being approached, but many people have the meters outside or located where the warnign will not be noticed.

BPC say you should be able to use 10 compact-fluorescent light-bulbs (CFL) and a television without problems. 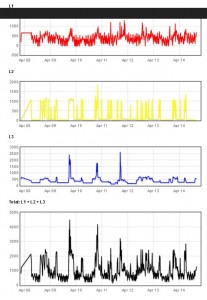 We have an energy monitoring system installed, and according to my charts we are able to run 2 fridges, 1 freezer, plasma TV, home-theatre, DSTV decoder and maybe 20 lights (mix of CFL and LED) without breaking the limit.

Briefly, the chart shows electricity usage on a 3-phase domestic power supply for one week.

What can be seen is that the spikes from yellow (water heater) and blue (oven) are what cause us to break the 2000W mark.

All we need to do to prevent DSM cutting us off is to switch off the water heater and not use the oven during peak times.  If the water heater has been on in the afternoon then there is enough hot water for the family (4-5 people) to shower and do washing up, then after 10pm we can switch it on again to be hot ready for morning.  Luckily we have an electric oven and gas hob so we can cook without using electricity.

If you want to estimate your power use you can get estimates for appliances from the internet, or look at the labels on the back of your equipment.  It’s worth remembering that the rating given on the label are when operating at full power, and different devices work in different ways:

But I don’t have a fancy energy monitoring system!

You could buy one of the Ellies energy monitoring products from Builders Warehouse (have seen them myself in the Francistown branch), or if you like tinkering (electronics and programming) and have deep pockets (mainly for the shipping) you could try OpenEnergyMonitor.

Or you can estimate using one of the following methods:

1) Check display, write down the units2) Come back in 15 minutes, write the new units3) Calculate the difference3) Multiply by 44) That’s your approximate usage in kWh (2.3 is the limit)A) Check if your meter has a flashing light with some legend like “1000 flashes per kWh”B) Count the number of flashes in 1 minuteC) Multiply number of flashes by 60D) That’s your approximate usage in Wh (2300 is the limit)E) Roughly, if flashing 25-30 times per minute you are approaching the limit: switch something off.Above are rough guides, and open to correction.Items that do not run constantly may affect the averages, e.g. if your fridge is not running while you count the flashes you might be 300W short.

The electric water heater (geyser) is usually the single biggest energy demand in a home, as such many people try to save power (and money) by switching it off as much as possible.

It’s not quite that simple though: if you switch it off and open the hot tap you draw cold water into the tank and reduce the temperature, so when you do switch it on it has to work for longer.  The only way to save money on water heating is to use less hot water!  (How often do you crack open a hot tap to rinse something and close it again before the hot water actually arrives?)

The debunking of various geyser myths is covered in more detail here (simple terms) and here (with engineering calculations).

TL;DR: leaving a geyser on all the time will cost you P1-P2 per day, you only pay real money when somebody opens the hot tap.

This chart shows one day in the life of our geyser, switched on all the time:

Within hours of implementation the buzzing increased in volume:

But I switched off all my appliances and I still got load-shed!

It’s possible that your whole suburb got cut off because individual DSM was insufficient to reduce total demand.  Or BPC are not sticking to the nominal 10A limit when they set the thresholds. Or the system is broken.

I got a “LOAD” message on my meter and got cut off outside of the published times!

I guess BPC reserve the right to implement DSM outside of the published times if national demand outstrips supply. Or the system is broken.

I buy units prepaid so they belong to me and when BPC cut off my power they are stealing my electricity!

Read your terms of service with BPC and the Electricity Supply Act.  Anyway, if there’s no supply your units aren’t being used. That’s not stealing. Not like the mobile phone services do with your prepaid data bundles, anyway.

Does it make a difference?

Considering that we, a middle-class family of five, rarely break the 2300W limit I’m not convinced: I need to do some more research into number of households receiving DSM and estimate some load factors…

Reducing electricity (and energy in general: petrol, diesel, firewood) usage is A Good Thing: it saves money and saves the planet.  Go and have a read of Sustainable Energy Without The Hot Air (pdf full version and pdf summary) – it’s a case study based on the United Kingdom but the principles are sound and can be applied anywhere (although wave energy might be a stretch for Botswana, and wind energy isn’t much cop either).

Parent, husband and civil engineer born and raised in Britain before emigrating to Botswana. Interests in construction, information technology, fitness, mechanics and mapping, among others. View all posts by Michael

3 thoughts on “Botswana Electricity – Load Shedding and Demand Side Management”

This site uses Akismet to reduce spam. Learn how your comment data is processed.